I have obsessive repetitive thoughts when I am stressed or anxious, especially when I wake up at 3am from nightmares that I have almost every night that keep me awake.  When that happens I have different mind tricks I perform to help distract me so I can go back to sleep.  This song is about that.  -Sheldon
Also note: This was an experiment with different drum sounds.  More than 8 different kick drums, snares and hi hats were used randomly throughout the song.  It gives the song a kind of unstable chaotic feel that goes well with the subject matter.  Best if listened to on headphones.
One more thing: There is a pause after the word "Quiet" is spoken, but the song isn't over until you hear the robotic fart.

Lucid Dementia is not "dead" yet.  Luci has been in hiding since the pandy.  Staying safe from you filthy humans.
Luci has been busy.  A new album rough draft is completed and recorded, the band just needs safe way to get together to record it.  Until then, Luci has been busy tinkering away in the studio.  Watching and waiting.  This is the result of some of that:

It's been here since January 1st 2022, you just weren't aware that you had been infected by it yet:

You've been waiting all your life
for a chance to kill, without consequence
you use your god just like a knife
to cut into everyone with your ignorance

your murderous rampage spreads like fire
with sanctimonious condescendence
any accusations you'll deny
and smile, with evil intents 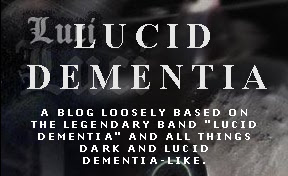